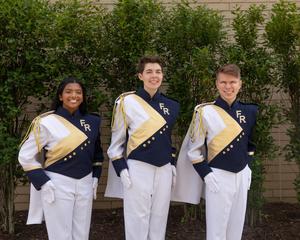 Franklin Regional Panther Marching Band gets ready for a big year with the selection of the new Drum Majors and Commanding Officers.

The Franklin Regional Panther Marching Band, under the direction of Mr. Kevin Pollock and Mr. Larry Silvestri, recently selected a new group of student leaders. Drum Majors for the 2019-2020 season are Lane Kline (senior), Ethan Leicht (junior), and Keethu Shriram (junior). These students auditioned and were selected by the Band Directors. The Drum Majors’ responsibilities include conducting the halftime show, leading the band in parades, and demonstrating strong leadership skills on and off the podium.

The Drum Majors will be leading their band down the streets of New York City this November as the band performs in the 2019 Macy’s Thanksgiving Day Parade®. This will be the band’s third appearance in the Macy’s Thanksgiving Day Parade®. The band is one of 12 high school and college marching bands selected to perform from around the country. They have also recently appeared in other nationally televised performances such as the 2016 Tournament of Roses Parade in Pasadena, CA and the 45th Presidential Inaugural Parade in Washington, DC.